Many people are always querying, “Where did the idea for the Cat come from?  How did you come to this?“ - which always leads to an interesting discussion.  The White Cat actually made his first appearance when he was sent by the Great I Am Supercomputer XIX from outer space to appear in an experimental Kosmischen Musik (sometimes termed Krautrock) band in Boulder, Colorado called Liebezeit.  On one fateful night, we staged a show at our rehearsal space and titled it, ‘Woodland Calling‘, in which we strove to convert the environs into an ‘electronic woodland’ replete with magnetic tape hung from the ceiling, colored lights, and dancers crawling about on the floor feeding grapes to an audience who took up residence at the opposite end of the space.  The supreme rule of the game was to show up as an animal that best suited one‘s character, a task that proved to be painless from my perspective, as I was already drawn to the Cat as a power animal, and maintained an interest in the glam and gender-bending affections of Peter Gabriel in early Genesis, Brian Eno in his Roxy Music days, and, of course, David Bowie‘s infamous character, Ziggy Stardust.  It should be noted that I am not gay, nor have I kept sexual company with anyone but females - this is neither here nor there; I do feel it is worth noting, however, that I have a larger balance of feminine tendencies than masculine, which makes wearing makeup and clothing that is typically considered ‘female‘ and blurring the lines between yin and yang natural to me.  That being said, I present this evidence to clear up any misconceptions about my orientation, and to illustrate that I am interested in a broader and deeper exploration that ventures into the spiritual side of things.  I further maintain that the idea of being a Cat is one that stems from Siberian shamanism, which I am deeply interested in and feel a strong connection with.  There is a plethora of evidence that shamans in Siberia and elsewhere would don costumes representing the particular animal whose spirit they were attempting to evoke.  I have very feline tendencies - I like to be clean, am a solitary hunter, can be nonchalant to the point of cold aloofness, and generally prefer to be left to my own devices rather than catering to a popular notion.  Thus, I wanted to explore these things initially in that Boulder show, which led ultimately to the creation of WhiteCatPink, aiming to bring an assortment of my interests into one (very unusual) arena.  I like what Peter Gabriel has stated about the excitement of being on artistic virgin snow - this idea of forging an entirely new path musically, which can be a challenge given that nothing is really ‘new‘ in music anymore.  However, WhiteCatPink remains unto his own, fiercely championing the Anglo/European sounds of Kraftwerk, NEU!, Serge Gainsbourg, Brian Eno and Einstürzende Neubauten, as opposed to the aural offerings coming from American bands.  Indeed, I have fostered a preference for things European, having a stronger proclivity for the progressive aspects of their music and cultures.  Bringing these musical influences into play with the aforementioned glam and shamanic aspects, as well as a touch of modern primitives and BDSM makes for a very individual presentation.  BDSM gets a bad rap in ‘normal‘ circles, seen as nothing more than a depraved expression for equally depraved people.  Actually, the people I have encountered who are on this particular wavelength are in fact largely intellectual, articulate souls who generally are seeking beyond the veil of ordinary experience.  They are bright, wickedly funny, charming entities whose aim it is to go a bit further than one would normally go, and using the particular elements of BDSM as a vehicle for this...  Accordingly, this gives WhiteCatPink a bit of a harder, more industrial edge that pays homage to Kraftwerk‘s type of ‘organizational‘ mentality.  I am interested in the clean, stripped down writing process that they embraced (to be explored in further detail in a future blog), and presenting this distinct European blend to my audience with humor, warmth, and of course, technical excellence and precision.  It is my aim to follow in my own vein of putting together my influences, rather than emulating the trends or trying to be like the critics‘ darlings.  There is nothing wrong with this approach; I am just not interested in these avenues of artistic expression.  Thus, WhiteCatPink exists to bring a unique blend of European and ancient audio-visual elements together, and I am happy to share this with you, my audience.  Welcome aboard the spaceship, and please enjoy your stay. 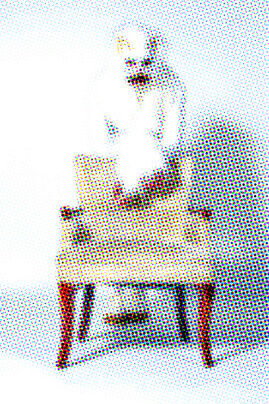